In my analysis of over 20 of the cheapest auto insurance companies in the state of Illinois.

The overall least expensive are Unique, Progressive, and State Farm.

Depending on the city you reside in, you should be able to find quotes from 21 to 34% lower than the average premium.

Other carriers you want on your list to get quotes are Lighthouse, GEICO, and Rockford Mutual.

Each of them can provide quotes from 10 to over 20% lower than the average rate.

Out of the 6 carriers, you will have a blend of national and regional carriers to find the most savings.

This article will cover the minimum requirements in Illinois, cost-saving strategies, and the least expensive car insurance companies by age.

If you would like to skip to a certain portion of the article, please use the table of contents down a little and to the right. If an individual is known to be at fault in an accident, bodily injury liability covers the hospital costs of the other people involved in the accident.

If minimum coverage is purchased, an insurer will pay up to $20,000 per head up to a total of $40,000 for all passengers per accident.

With minimum coverage, an insurer will pay out up to $15,000 to cover property damage costs. Note: The lowest price insurers for a 30-year old are Unique and Progressive. I queried each at $843 and $845 per year. For a driver with good driving history, any of the 5 illustrated would be competitive choices.

As with most states, Illinois has mandatory car insurance minimums set at 20/40/15, and each number is in thousands represented respectfully by the figures above.

To drive legally in the state, you have to have a valid driver’s license, proof of coverage, and you have to keep the insurance card on you or in your vehicle at all times.

In tort states like Illinois, each time an automobile accident happens, law enforcement and each auto insurance corporation will decide which driver caused the crash. Note: For a 35-year-old driver in Illinois, all 5 insurers illustrated are competitive choices. Each clustered around the $750 to $800 range. A family of 4 would find cheaper quotes by comparing Unique and Progressive.

In the opinion of the state’s laws, the individual accountable for causing the accident will be paying the doctor’s bills for those needing medical treatment.

Any repair bills to the automobile will have to be paid too.

The table below outlines the cheapest insurers in Illinois for drivers from 25 to 55 years of age.

Unique, Progressive, and State Farm can offer quotes 21% to 34% lower than the median rate for similar age drivers and profiles.

Another carrier in the top 3 overall, but was numerous times when querying for local zip codes, is Lighthouse.

Lighthouse can offer quotes from 16% to 32% lower, depending on your age and profile.

GEICO and Rockford Mutual can offer quotes from 10% to over 20% lower than average.

Two other carriers you would want to put on your bucket list to get quotes are Nationwide and Farmers.

Both carriers, at times, we’re able to go head-to-head with Unique, Progressive, or Lighthouse depending on your age, vehicle type, and profile.

Each aged driver had one driving violation, good credit, and a single. Below I have outlined over 20 carriers with the number of written premiums, rate change, complaints, and consumer rating.

The carrier with the highest amount of written premiums in Illinois is State Farm.

Of course, they have more complaints, which are to be expected.

However, the complaint ratio is low.

The percentage rate change ranges from 2.4% to 4%, depending on the company.

If you get a traffic violation, the rate change could increase dramatically.

Lighthouse, Unique, and Rockford Mutual are not on the list since there isn’t any reliable data.

They are registered with the state to do business as an insurer.

This is normal too.

Any other data is compiled from the Insurance Information Institute (III.org), JD Power & Associates, and AM Best.

Since Illinois has major cities such as Chicago, Rockford, Peoria, and Cicero, it would be a good idea to carry comprehensive coverage.

This is also called “non-collision” coverage and will protect your vehicle from damage caused by natural disasters, which could happen in Illinois since heavy rains, winds, and snow during the winter season. 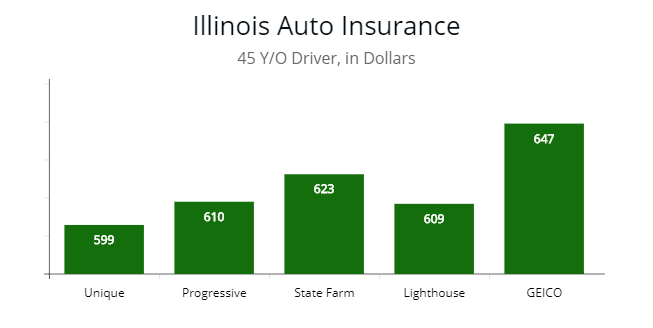 The cheapest car insurance for a 45-year-old driver can be found with Unique, Lighthouse, and Progressive. Each is more than 29% lower than the “mean” rate. State Farm and GEICO are competitive too.

Other coverage to consider when comparing insurance quotes is a collision, uninsured motorist protection, and GAP coverage, if you have financed your vehicle. The best choices for a 55-year-old driver in Illinois are State Farm and Progressive. Each near the $500 mark for a driver with good driving history. Lighthouse, Unique, and GEICO clustered at the $550 mark, which makes them competitive too.

Below is a list of 36 less populated cities in Illinois with the average premium.

Location is a primary factor when insurers determine your premium.

One of the reasons you will have significantly different premium costs from one city or zip code to another.

If you find that your quoted premium is higher than those listed below, you may either be a young driver or your driving record is not clean.

If you would like a detailed comparison of quotes by more populous cities in Illinois, please read further below.

The average car insurance rate in Chicago, Illinois, is about $1,900 per year.

As illustrated, I was able to find rates below the $1,100 with two insurers, Unique and Progressive.

Which is 45% lower than the average premium cost for similar age drivers.

For a 45-year-old driver, the lowest premiums are found with Unique and Progressive.

Which is 46% lower than the average premium for similar profile drivers.

All of the insurers illustrated in the table are more than 34% below the city “average” rate.

For any driver, it would be smart to compare all the insurance firms listed in the table.

Finding cheap car insurance is easy in Aurora if you know where to look.

A 45-year-old driver can find rates well below the $800 with Unique and The Hartford.

I queried each at $731 and $730 respectfully per year for full coverage.

Which is over 41% lower than the “mean” quote for similar age drivers in Aurora.

For a competitive comparison and the best coverage for low cost, it would be wise to get quotes from all companies.

You can find affordable auto insurance in Rockford with Unique, Lighthouse, and GEICO.

Since Rockford’s average rate is nearly $1,300 per year, a premium with Unique would save you more than 34% annually.

A 45-year-old driver would do well by comparing Lighthouse, Hartford, and Unique.

Which is 39% lower than the median quote for similar age drivers in Rockford. It would be wise for a family of e to get quotes from Lighthouse and Hartford plus the top insurers such as GEICO and State Farm.

Which is nearly 38% lower than the median quote for similar age drivers in Naperville.

A 45-year-old driver can find low rates with State Farm, The Harford, and Unique.

Which is 32% to 34% lower than the median quote for similar profile drivers in Naperville.

The average rate in the city of Naperville is $1,290 per year.

With each of the insurers, I queried you would find savings of at least 14%.

The lowest premiums for a 30-year-old driver in Elgin are found with State Farm, Lighthouse, and Unique.

A 45-year-old driver can find the same low rates as the Lighthouse, State Farm, and Unique.

Which is 26% to 29% lower than the “mean” quote for similar age drivers in Elgin.

The average auto insurance rate in Springfield is over $1,400 per year.

With Lighthouse, Springfield, and State Farm, you can find more than 30% in savings for a 30-year-old driver.

The Hartford, GEICO, and Progressive shouldn’t be counted out either since their rates are 22% lower than Springfield’s average rate.

A 45-year-old driver would find substantial savings by comparing all five the insurers illustrated.

This is 16% lower than the median rate for drivers of similar age.

To find the least expensive premium in Schaumburg, start with Unique, Progressive, and Lighthouse.

Each insurer is over 18% lower than the median rate for a 30-year-old driver.

A 45-year-old driver can find the cheapest quotes with Unique, Progressive, and Lighthouse.

Which is 19% lower than the median quote for drivers of similar age and profile in Schaumburg.

State Farm and Farmers offer cheap car insurance with prices at $875 and $898, respectfully.

Drivers in Peoria can find inexpensive coverage by getting quotes from Lighthouse, Farmers, and Unique.

Which is 14% lower than the “mean” quote for drivers of similar age and profile.

Progressive and State Farm offer competitive quotes at $1,243 and $1,276 respectfully for full coverage.

A 45-year old can find affordable rates with Lighthouse, Farmers, and Unique.

Which is 14% lower than the median rate for drivers in Peoria of similar age.

A 45-year old should put Progressive and State Farm on their list to get quotes.

Both carriers offer competitive rates at $897 and $932, respectfully.

Which is 24% lower than the median rate for drivers of similar age and profile.

You may want to put Progressive and State Farm on your bucket list to get quotes.

Both carriers are significantly lower than the median quote.

A 45-year old can find the least expensive quotes with Lighthouse, Farmers, and Unique.

By far, Lighthouse was able to provide the lowest quote at $716, which is 25% lower than the median quote for similar age drivers.

Farmers and Unique offered quotes at $785 and $800 respectfully.

Which is 20% lower than the “mean” rate for similar age drivers.

Drivers in Joliet which aren’t getting the lowest quotes are probably looking in the wrong spot.

Start by getting quotes from Unique, Lighthouse, and State Farm.

Which is 19% lower than the median rate for drivers in Joliet.

A 45-year old can find affordable quotes with Unique, Lighthouse, and State Farm.

Which is 21% lower than the median rate for drivers of similar age and profile.

Nationwide and Farmers are competitive for a 45-year old with cheap car insurance quotes at $824 and $876, respectfully.

Who has the best auto insurance in Illinois?

Depending on your location in Illinois, your best options are Allstate, Progressive, and The Hartford.

For local companies, get quotes from Rockford Mutual, Lighthouse, and Pekin.

How much is auto insurance per month in Illinois?

A 30-year-old driver is going to pay approximately $550 for a 6-month policy.

The same driver is going to pay $988 for full coverage.

When should I drop full coverage?

If you pay for repairs out of pocket or if you believe repairs aren’t worth the cost.

A rule of thumb is your 12-month premium payment is 10% of the vehicle’s value.

If your car is financed, you will have to maintain full coverage on the vehicle.